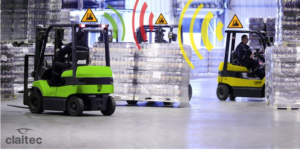 The collision between forklifts is a very real risk in many industrial plants.

We have observed that our customers’ warehouses and the warehouses of those who ask for our opinion, consistently experience very heavy traffic or movements between larger and small forklifts, and as such, the risk of collision is significantly increased.

We have also noticed corners or areas where forklift drivers lose visibility, either because they are 90-degree bends, or because there are doors that prevent them from seeing another truck on the other side.

How can these type of risks be minimized?

The Collision Avoidance System (CAS-G2) is a solution that warns the forklift driver when it detects other vehicles in a 1-40 metre settable range. There are two zones available, a Warning zone and a Danger zone. Both these zones can have an adjustable range set. So, whether the other truck is circulating in the “blind spot” of a curve, or whether it’s on the other side of an automatic gate, the Collision Avoidance System (CAS) system will alert the driver, via a light and/or an alarm, so that he or she is aware of the presence of another vehicle is in its vicinity and thus use the appropriate caution.
The CAS-G2 can work as a standalone system as an extension of the PAS system. A CAS unit is placed on the forklifts so that they can detect each other. When a forklift detects another one in the warning and danger zone, the system alerts the driver of the imminent risk. The system also allows for some variations in the configuration – for instance, it is possible to make the truck slow down when it detects the presence of another vehicle in their immediate vicinity if speed limiting is already a function of the forklift.

What are benefits of the CAS-G2 system for you?

First and foremost, the safety of your workers. By dramatically reducing collisions in heavy traffic areas and in areas of poor visibility, the risk of accidents decreases. The design of the Collision Avoidance System (CAS-G2) solution also allows the driver to notice immediately when another truck is in the same area of ​​work, warning them of a possible collision.

Not only that, the CAS-G2 system also delivers increased productivity as forklift drivers can focus on their work without having to worry about their safety around other forklifts. Thus, not only will you achieve a higher level of efficiency, you will also notice a significant reduction in the stress levels of your workers.

What are the main areas of application of this solution?

As we mentioned above, the Collision Avoidance System (CAS-G2) system is ideally suited to areas with heavy forklift traffic and low driver visibility. For instance, in:

The CAS-G2 system is also very useful in places where large forklifts coexist with smaller trucks.