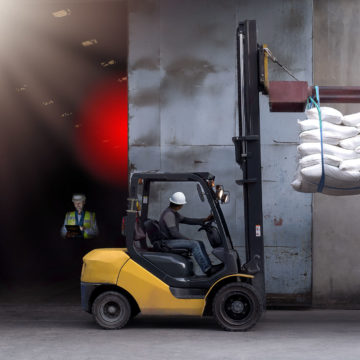 More than 3,400 workers lost their lives in work-related incidents from 2003 to 2016 (source: Safe Work Australia). Around 25 per cent of that occurred within the transport, postal and warehousing industries. Although the number of worker fatalities gradually gets lower each passing year, the ultimate goal would be to achieve a ‘zero accidents’ workplace.

But is it a realistic goal? Is it really possible to bring down the number of workplace accidents to zero (no injuries and fatalities at all) especially in busy warehouses and manufacturing facilities?

Workplace accidents are costly because of reduced productivity, lost sales, costs on equipment repairs and workers’ compensation claim. More importantly, a single accident can result in a person’s disability or loss of life.

Vehicle collision is one of the most common incidents that cause injuries and fatalities. Truck and road transport is a part of that but we also have to pay attention to what happens within the commercial or industrial site. There could be more potential collisions and other types of accidents because of the forklift and pedestrian activity in the area. It’s due to the complexity of the network within the logistics and manufacturing facilities.

Also, driving a forklift is far from straightforward. The driver has to think about the load in front, the path, the presence of other forklifts, turning into corners, driving through blind spots and paying attention to the numerous warning signs and alerts (plus the new memos about driving safely and maintaining orderliness in the workplace).

Add to that the wide range of variability in warehouse operations, there are peak times when orders and transactions are mountain-high. This then results to more back and forth driving and possibly longer driving hours. The combined complexity and variability plus the driver fatigue all contribute to higher chances of workplace accidents.

Also, uncertainty and accidents are a natural part of life. Some people trip over their own feet and lose their balance while standing still for no good reason. It’s a universal rule that sometimes things just go wrong no matter how careful we are.

That doesn’t mean aiming for ‘a zero-accidents workplace’ won’t help us. We can still aim for it to promote a stronger safety culture and minimise the number of incidents. It’s the ultimate ideal and it can be both inspiring and discouraging at the same time.

Why aiming for the ultimate ideal is discouraging?

Failures and mistakes are inevitable, especially in busy warehouses. Because of that high and ‘impossible’ goal, the effects of the failures and mistakes get magnified. It destroys the company morale and makes us think about whether we should still aim for that goal.

Aiming for zero incidents sounds great, but if we overthink it doubts start to appear. Once we feel those doubts we start sabotaging our own thoughts and actions. We won’t support the ideal in the first place and as a result, we won’t try to achieve that (and thereby no reasonable and measurable actions will take place).

On the other hand, aiming for the ideal could also be inspiring. It’s similar to striving to build a colony in Mars, fully understanding the universe or curing death. More than half of the people might get inspired by the idea. This can result in a cultural shift in our way of thinking and redefining what’s possible.

Some people might be quick to point out the disasters that resulted from aiming too high. One such notable disaster is the failure of the Space Shuttle Challenger (occurred January 28, 1986) where 73 seconds after takeoff, the shuttle erupted in a fireball and killed the entire crew (five NASA astronauts were killed). Media coverage was extensive and the incident became a reason for major discussions in engineering safety.

This is quite similar to achieving a 100% safe and zero accidents workplace. The goal is just too high and others might have concerns about the unexpected effects of such endeavour. For instance, fully automating the warehouse will drastically improve human safety because there will be no humans involved in the first place (at least in the warehouse facility). But what if something goes wrong and everything falls down from shelves because of a system error and a collision? And what about the concerns about replacing humans with robots?

Busy warehouses are known for their level of unpredictability and variability. Even during periods of smooth and quiet operation, potential incidents still loom around the corner. And yes, accidents can happen at a certain time or place because we least expect them. In other words, the unpredictability is a huge factor in making accidents happen.

What should we do then? The first thing we should do is redefine what a goal is. In competitive industries and businesses, the goal should be achieved no matter what (and at any cost). But for our purposes here, goals are defined as something that we should aim for (not necessarily achieve). In other words, having a certain goal should put us in a better direction.

Forcing it and trying to achieve the goal – no matter what – may potentially result in reports and documents being falsified to make the numbers (and supervisors) look good. People might cover up incidents and fail to report accidents because they want a ‘zero’ on their report at the end of the quarter or year.

To prevent this, it’s best to put the goal of zero accidents back of mind (don’t focus on it too much) while planning on better workplace safety. It’s also better to pay more attention to the work environment itself and how forklift drivers and pedestrians interact with one another, especially during peak times. Invest in an accident prevention system. These warning and alert systems won’t promise a 100% safe and zero accident workplace, but can certainly steer us towards ‘zero’.